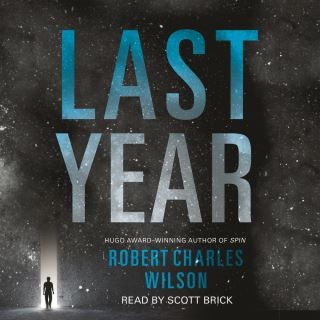 Two events made September 1st a memorable day for Jesse Cullum. First, he lost a pair of Oakley sunglasses. Second, he saved the life of President Ulysses S. Grant.

In the near future of Robert Charles Wilson's Last Year, the technology exists to open doorways into the past--but not our past, not exactly. Each "past" is effectively an alternate world, identical to ours but only up to the date on which we access it. And a given "past" can only be reached once. After a passageway is open, it's the only road to that particular past; once closed, it can't be reopened.

A passageway has been opened to a version of late 19th-century Ohio. It's been in operation for most of a decade, but it's no secret, on either side of time. A small city has grown up around it to entertain visitors from our time, and many locals earn a good living catering to them. But like all such operations, it has a shelf life; as the "natives" become more sophisticated, their version of the "past" grows less attractive as a destination.

Jesse Cullum is a native. And he knows the passageway will be closing soon. He's fallen in love with a woman from our time, and he means to follow her back--no matter whose secrets he has to expose in order to do it.

Robert Charles Wilson was born in California and lives in Toronto. His novel Spin won science fiction’s Hugo Award in 2006. Earlier, he won the Philip K. Dick Award for his debut novel A Hidden Place; Canada’s Aurora Award for Darwinia; and the John W. Campbell Award for The Chronoliths.

Scott Brick first began narrating audiobooks in 2000, and after recording almost 400 titles in five years, AudioFile magazine named Brick a Golden Voice and “one of the fastest-rising stars in the audiobook galaxy.” He has read a number of titles in Frank Herbert’s bestselling Dune series, and he won the 2003 Science Fiction Audie Award for Dune: The Butlerian Jihad. Brick has narrated for many popular authors, including Michael Pollan, Joseph Finder, Tom Clancy, and Ayn Rand. He has also won over 40 AudioFile Earphones Awards and the AudioFile award for Best Voice in Mystery and Suspense 2011. In 2007, Brick was named Publishers Weekly’s Narrator of the Year.

Brick has performed on film, television and radio. He appeared on stage throughout the United States in productions of Cyrano, Hamlet, Macbeth and other plays. In addition to his acting work, Brick choreographs fight sequences, and was a combatant in films including Romeo and Juliet, The Fantasticks and Robin Hood: Men in Tights. He has also been hired by Morgan Freeman to write the screenplay adaptation of Arthur C. Clarke’s Rendezvous with Rama.