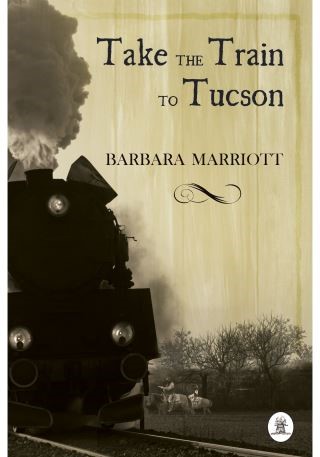 Take the Train to Tucson

It's 1893, and Leonarda Stanton Worthington is beginning the year in trouble. It all starts when she takes the train to Tucson to join her father, and gets involved with train robbers and a cream cake. Before she can get sand in her shoes, or poked by a cactus, she is caught up in murder and kidnapping by a band of ruthless western outlaws. Too much for Leo's feisty spirit?

NEVER. She is determined to catch the culprits and bring them to justice before the local Sheriff, the Pinkerton Agents, and her father can solve the case. Join Leo as she stirs up old Tucson and then follows her journalistic nose as far north as Oracle. Nothing is sacred to Leo, not the Suffragette movement, a lost mine legend, or the financial status of her neighbors. Now that Leo's around, things in the Arizona Territory are heating up, and it's not only the temperature.

Barbara Marriott’s insatiable curiosity has sent her tumbling into some rather interesting adventures. Among these is flying with the U.S. Navy’s Flight Demonstration Squadron, the Blue Angels, writing a series of travel books for American sailors, and being elected to Who’s Who in American Women.

When she moved to a west she knew nothing about, she set about researching her new home. She became so intrigued that she wound up capturing its history and its essence in several non-fiction books. It was a fertile field for her and she couldn’t get enough of it. Six books later she is still researching the old stories of the Wild West and turning its tales, facts, and sometimes mystery, into books.

From University Professor, to Management Consultant and Trainer, to Creative Advertising Director, her professional fields have allowed her to observe life. However, it is her Ph.D. in cultural anthropology that gives her the tools to get to the core of her subject—to satisfy her unquenchable need to know, and the reader’s need to know more.