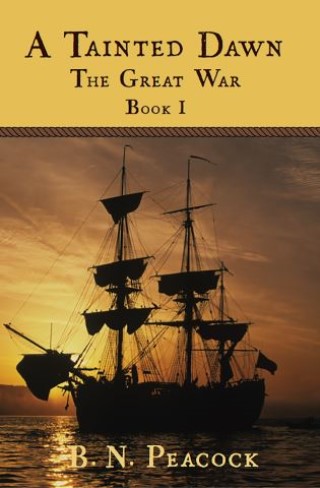 The Great War: Book I

And yet, old hostilities persist: England and Spain are on the brink of war. France, allied by treaty with Spain, readies her warships. Three youths – the son of an English carpenter, the son of a naval captain, and the son of a French court tailor – meet in London, a chance encounter that entwines their lives ever after. The English boys find themselves on the same frigate bound for the Caribbean. The Frenchman sails to Trinidad, where he meets an even more zealous Spanish revolutionary. As diplomats in Europe race to avoid conflict, war threatens to explode in the Caribbean, with the three youths pitted against each other.

Will the dawn of the boys’ young manhood remain bright with hope? Or will it become tainted with their countrymen’s spilled blood?

Peacock majored in Classical Studies (Greek and Latin) at Franklin & Marshall College in Lancaster, PA. In her junior year,  she spent a year abroad studying at Queen Mary College, University of London in England which led to the discovery of another passion, travel. Interested in finding a career that involved travel, Peacock received an M.A. in International Relations from the University of Kentucky and an M.S. in Agricultural Economics from Clemson University. The professional years followed, with work at USDA’s Economic Research Service as a commodity analyst and writer, with occasional television appearances. It was during this time she met and married her husband Daniel, who also loves to travel. They indulged their mutual interest, visiting such places as Austria, Italy, the Czech Republic, Slovenia, and Tobago, as well multiple trips to England, Belgium, and the Caribbean after her children were older.Throughout her travels, Peacock continued writing, book reviews and contributions to the local newspaper, and The Tainted Dawn, the first in a series of novels about the great naval wars between England and France, 1792--1815.