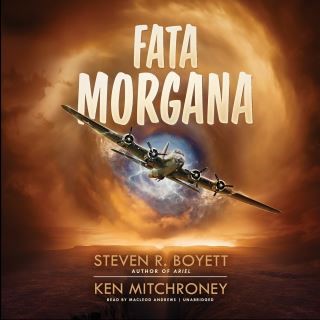 At the height of the air war in Europe, Captain Joe Farley and the baseball-loving, wisecracking crew of the B-17 Flying Fortress Fata Morgana are in the middle of a harrowing bombing mission over eastern Germany when everything goes sideways. The bombs are still falling and flak is still exploding all around the 20-ton bomber as it is knocked like a bathtub duck into another world.

Suddenly stranded with the final outcasts of a desolated world, Captain Farley navigates a maze of treachery and wonder—and finds a love seemingly decreed by fate—as his bomber becomes a pawn in a centuries-old conflict between remnants of advanced but decaying civilizations. Caught among these bitter enemies, a vast power that has brought them here for its own purposes, and a terrifying living weapon bent on their destruction, the crew must use every bit of their formidable inventiveness and courage to survive.

Fata Morgana—the epic novel of love and duty at war across the reach of time.

Steven R. Boyett's (steveboy.com) novels include the fantasy classic Ariel, The Architect of Sleep, Elegy Beach, and Mortality Bridge. He wrote a draft of Toy Story 2 for Pixar/Disney, and created the groundbreaking online music series Podrunner and Groovelectric. He has been a professional martial arts instructor, paper marbler, advertising copywriter, proofreader, writing teacher, website designer & editor, chapbook publisher, and DJ who has played in major cities and Burning Man. He lives in the San Francisco Bay area.

Ken Mitchroney's (facebook.com/Ratfink) film and television credits include director, head of story, director of photography, and storyboard artist on Storks, The Lego Movie, The Ant Bully, Toy Story 2, Monsters Inc., The Annoying Orange Show, Mighty Magiswords, and more. His comic illustration includes Ren & Stimpy, Teenage Mutant Ninja Turtles, Myth Conceptions, and creating the influential Space Ark. He is an official artist for the Ed "Big Daddy" Roth estate, and official illustrator for the Oakland Athletics and at one time the Baltimore Orioles. Mitchroney has been a professional race-car driver and pinstriper, and restores and runs vintage locomotives. He is currently involved with the restoration of the Ward Kimball collection at the Southern California Railway Museum in Perris, California. He lives and works in the San Francisco Bay area and Los Angeles.

MacLeod Andrews is an actor, voice actor, and audiobook narrator. He has narrated dozens of audiobooks, earning eleven AudioFile Earphones Awards and placing as a finalist for the prestigious Audie Award for best narration in 2010, 2011, 2013, 2014, 2015, and 2016. He is a company member of Rising Phoenix Repertory in Los Angeles.