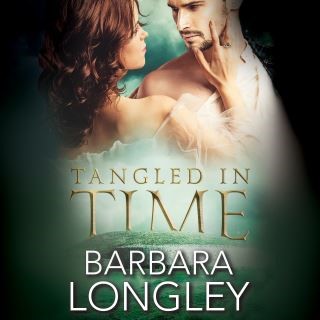 A time-travel romance for fans of Diana Gabaldon and Hazel Hunter.

To set him free from an ancient curse, she must travel to a time of myth and legend…

Regan MacCarthy’s ability to see ghosts is a gift inherited from her Irish ancestors, but it’s one she’d dearly like to give back. In an attempt to return her powers to their source, she travels to Ireland to harness the ancient magic that still permeates the mystical site of Newgrange. Instead, something far more unexpected awaits her: a strapping, gorgeous stranger who insists he’s a centuries-old Celtic warrior.

Fáelán was one of Fionn MacCumhaill’s elite soldiers before being cursed by a resentful fae princess. The only way to free himself is to fall so deeply in love that he’d sacrifice his life. Not an easy matter when he’s invisible to most. Yet Regan sees him—not just the proud, handsome warrior on the surface, but the complex man beneath. Only when it’s too late does Fáelán realize that drawing this beautiful mortal into his world has endangered them both, and may destroy the happiness he’s waited an eternity to claim…