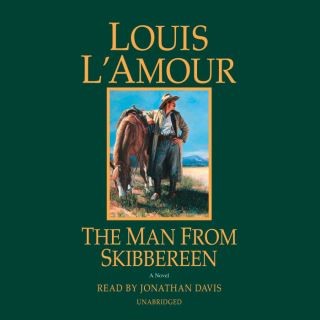 The Man from Skibbereen

Crispin Mayo was a reckless young brawler who’d left his tiny fishing village for the vast American frontier. Headed west to join a railroad construction crew, he came upon an isolated station—and a mystery. The shack was abandoned, but fresh blood spattered the floor, and the telegraph was clicking away unattended. When Mayo stepped inside and put a hand on the telegraph key, he had no way of knowing the course of his life would change forever—and that he would become entangled with a band of Civil War veterans with a score to settle against the government…and a feisty young woman who’d risk anything to save the people she loved. Cris Mayo, who had never backed away from a fight in his life, was about to have his courage put to the ultimate test.

Jonathan Davis: LOUIS L'AMOUR was truly America's favorite storyteller. He was the first fiction writer ever to receive the Congressional Gold Medal from the United States Congress in honor of his life's work, and was also awarded the Medal of Freedom. There are over 3 million copies of L'Amour programs in print from Random House Audio.